Now for a complete change of pace from the original Halo trilogy, we have Halo Wars. Despite the fact that Halo actually started life as an real time strategy game, it still strikes me as incredibly unlikely that Microsoft would have ever greenlit this. I guess they figured a console RTS had more of a chance of success with the Halo brand behind it than without, and they were probably right. Still, I didn’t know many Halo fans who were all that excited about the prospect at the time, and console FPS fans and RTS fans were mostly two different breeds. Regardless, this badass trailer produced by Blur did a lot to get the Halo fans pumped up and RTS fans (well, the ones who would condescend to play an RTS on a console) would be placated by knowing that Ensemble Studios, responsible for the Age of Empires and Age of Mythology series, utter classics of the genre, would be at the helm. 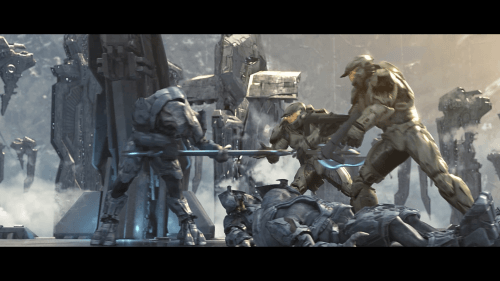 “The badass cutscenes were also produced by Blur.”

Me? Well, as both a Halo fan and an RTS fan (and admittedly, not a hardcore one) and having played my fair share of Age of Empires II, I was probably about as close to their target demographic as you could get. Despite this, I wasn’t all that hyped up for it, and while I did play through the demo (which I briefly talk about here, though I somehow have no recollection of) I never got around to playing the full game. While it was pretty well received by fans and critics alike, it’s reasonable to assume that a similar level of disinterest (along with numerous internal factors) would lead to Ensemble closing its doors, sadly making Halo Wars their very last game.

For this playthrough I played the Xbox One Halo Wars: Definitive Edition on my Series X. The “Definitive Edition” is a remaster of the original game released alongside Halo Wars 2. With higher resolution textures and improvements to lighting and particle effects but not a lot else, it’s essentially just a re-release. While this means it’s not going to blow you away with contrast between the versions like the first two Halo games I covered, it is, at least, very faithful to the original. The game has aged pretty well, so that’s not a problem. 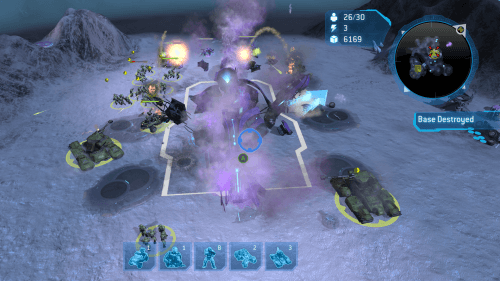 I’d actually started my playthrough on “Heroic” just as I did with the first three Halo games, but I found that the effort to beat some of these missions on Heroic simply wasn’t worth it – I could beat them, sure, but it took longer due to losing units more easily, and that sapped a lot of the fun out of the experience. Lowering the difficulty one notch to “Normal” was a big improvement for me. I suppose I enjoy overcoming bumps in difficulty in FPSes a lot more than I do in RTSes, where my builds and priorities are the biggest differences in how I play from session to session rather than toying too much with tactics. That, and the kinds of scenarios you encounter in a single player campaign like this so often constrain your options for the sake of variety, not doing a great job of reflecting the full array of options present in a pure skirmish match as a result. 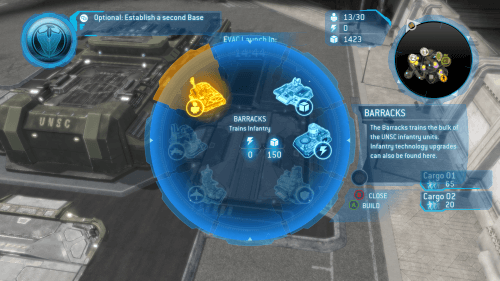 “The console control scheme makes excellent use of radial menus.”

I think another issue was the controls. Don’t get me wrong, I think Ensemble did a fine job with translating the RTS to the console, and from other console strategy game experiences I’ve had, I think the idea that strategy games don’t quite work on consoles is total bunk – there are plenty of examples of at least passable RTSes on console. Still, I have a lot of hours playing of RTSes on PC under my belt and playing them with a mouse and keyboard is in-grained at this point. For one, I found my ability to appropriately micromanage my units lacking. Halo Wars lets you select all of your units, all of your units on the screen, and all of the units of only a particular type in either case, which is just enough to allow you to do most anything you’d want to do with a little creativity. Still, that pales in comparison to being able to quickly make groupings of specific units of mixed unit types and assign them to hot keys for later use. Interestingly, I made the same complaint over 10 years ago when I played the demo. I definitely did feel slightly hobbled by this in some of my busier missions though, and this led me to coming up with numerous cheesy strategies of deploying tons of the same unit – masses of fully upgraded Warthogs being a particular favorite of mine, being both cheap to replace when they inevitably get blown away, and hilarious to watch bound haphazardly across the map.

Continuing the trend I started with my re-play of Halo: CE, I unlocked every skull and black box collectible on each map, though chasing them down really wasn’t all that enjoyable as it was in the previous games. Some don’t appear on the map until certain challenge conditions are met, making finding them more naturally impossible, and resulting in them being a bit of a distraction from the actual goals of the mission. More importantly, the reward for unlocking them is a let down. Skulls function similarly to previous Halo games, but in the case of the black boxes, each one unlocks a single entry on a giant timeline of the events around the game. This glorious lore dump is no doubt cool for fans of the franchise, but they’re just short text blurbs – no cutscenes, not even voiceovers. A little on the weak side. 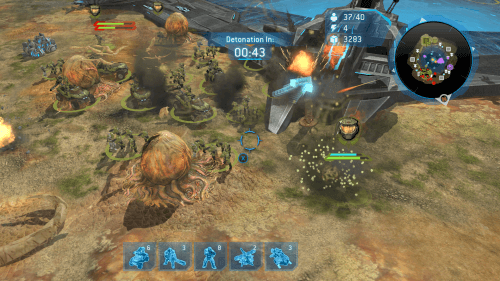 While I’m being negative, I also encountered a few bugs and other oddities during my playthrough. Probably an artifact leftover from the remaster, but in-engine cutscenes seem to run at a reduced, stuttery looking framerate, I had at least one total system crash during a mission, and on another occasion (on the same mission!) I lost the ability to control a special vehicle which made winning the scenario impossible and caused me to have to reload and lose a bunch of progress. I wouldn’t say these issues were numerous enough to ruin my experience, however, but there were enough of them to take note. That said, I didn’t have any real issue with unit pathing, which is a common complaint I’ve seen online.

There’s also the story. As this is a side story taking place out of chronological order and well before the main series, I’ll go ahead and recap its plot right here. While I’m fairly vague in these plot summaries they absolutely do still contain spoilers, so skip the next paragraph if you don’t want the plot to be spoiled! 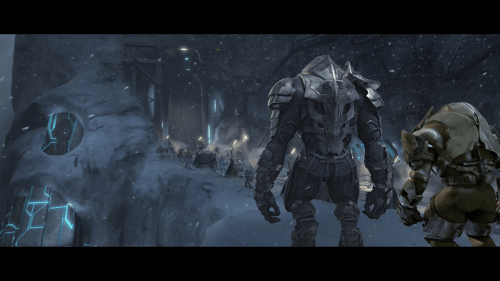 “The Arbiter’s back! Only this is a different one, and he has zero personality.”

The story: As part of the Harvest Campaign, an effort to retake the planet of Harvest, the first human colonized world with the unfortunate distinction of being decimated by the Covenant, marines of the UNSC colony ship “Spirit of Fire” discover a newly excavated Forerunner facility containing an interstellar map. Using the map, Professor Anders, a researcher aboard the Spirit of Fire, identifies another human colony world, Arcadia, as being a point of interest for the Covenant. Arriving too late, the Spirit of Fire finds Harvest’s defenses breached and the colony already under siege by Covenant forces. Linking up with local defenses, including Spartan Red Team, Arcadia City is evacuated. Efforts to further repel the Covenant eventually lead the UNSC to locate concentrated Covenant activity around yet more Forerunner ruins. The UNSC push the Covenant out, though the victory is short-lived as the Arbiter abducts Professor Anders and flees Arcadia. In pursuit, the Spirit of Fire arrives at an uncharted planet being overrun by Flood, which they quickly learn is actually a Forerunner Shield World. Professor Anders manages to escape, revealing that the Arbiter planned to use her to activate a fleet of powerful Forerunner warships to help the Covenant decisively win the war. Captain Cutter approves a risky plan to use the Spirit of Fire’s faster-than-light drives to destroy the entire Shield World, keeping the Forerunner fleet out of the hands of the Covenant. Successful but now without faster-than-light capability, the Spirit of Fire’s crew goes into cryogenic storage while the ship begins the long journey home.

It all feels, eh, a little generic. I say this having already played almost all of the other games in the series, so perhaps I wouldn’t have felt that way at all if I played it at the time. It might have been utterly groundbreaking for all I know. Either way, this isn’t helped by the fact that the characters were all just a little flat. I really couldn’t convince myself to care all that about Sgt. Forge, Captain Cutter, or Professor Anders. Hell, I probably liked the Spirit of Fire’s AI, Serina, more than the lot of them. Everyone just came across as low effort archetypes to me, and I think I would have felt the same back in 2009. 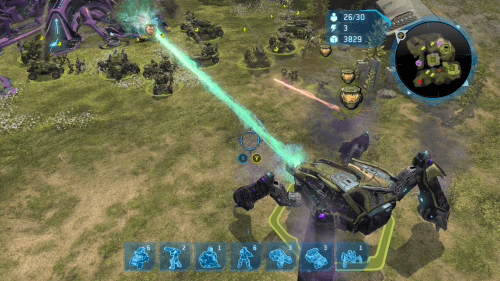 “One of my Spartan’s jacked a Scarab. Ridin’ in style!”

While that all sounded more than a little sour, no, I didn’t dislike the game. In fact, I felt like Ensemble did a great job representing the Halo universe. The presentation is faithful to the original games and quite skillfully executed, with the new units added doing a lot to make both the Covenant and the UNSC feel more like actual military forces than what was represented in the previous Halo games. The soundtrack is great. The cutscenes, awesome! It also definitely succeeds as a RTS, with some interesting units, tech trees, a decent amount of variety in the scenarios you’re thrown into in the campaign, and an interesting take on the classic formula, with simplified resource gathering and some other concessions seemingly made around the platform. I think one of the bigger compliments I could give the game is that I had been feeling the urge to play some classic RTS games lately and Halo Wars managed to thoroughly scratch that itch. Once completing the campaign, I dove into several skirmish matches against AI which were a ton of fun and sealed my overall positive impression of the game.

I’d say if you’re a Halo fan, you should definitely give it a chance. If you don’t have any RTS (or other strategy game) experience you absolutely might bounce right off of the game. Then again, it might also end up being one of your favorite Halo games, and your gateway into a whole new genre. Now, back to Bungie…