Last week I dusted off my pile of shame and played through 2008’s Prince of Persia on Xbox 360. Having played Prince of Persia: Sands of Time on the original Xbox and absolutely adoring it I was pretty interested on all of the changes this reboot was making to the series. Yes, it is a reboot of sorts: you’re no longer the titular prince, at least not in this game – I could easily see the roguish, unnamed character eventually developing into the prince in subsequent games, assuming there ever are any, but for now you’re just some tomb raiding (his words, not mine!) smart ass with a knack for acrobatics.

Anyway, I’ve got to start off talking about the incredible graphics here as they’re surely the most distinctive thing about the entire game. The beautiful, vibrant watercolor meets cell shading art style is quite brilliant – totally jaw dropping at times. There’s also some great vistas in certain areas, probably amongst the best I’ve seen this generation. The animations are also quite good. In particular some of the interaction between your character and Eleka while platforming, such as when you swap places or when you catch her during a jump, are unique and very impressive. They absolutely nailed it! 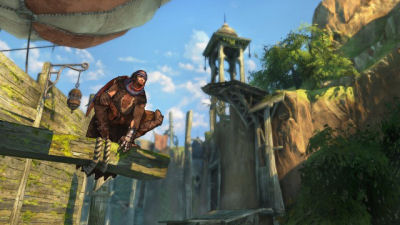 The sound was one of the first things that caught me off guard – the characters, especially your character, sound totally out of place in the setting. When combined with your character’s fun, flirtatious relationship with Eleka it almost reminds me of the type of thing you’d find in a Disney animated movie and, when you think of it that way, it kind of makes sense. In other words it was probably intentional. The music, on the other hand, fit well enough and some of the tunes stood out as really enhancing the experience at times.

That music and those graphics, combined with the back story that is unraveled as you explore each new area and converse with Eleka, also goes a long way in fleshing out the setting. In fact, I’d go as far as saying that by the end of the game the temple, palace, and surrounding city felt like a major character in the game itself. Speaking of characters, although their relationship didn’t quite develop like you might think it would, especially if you’re now thinking of it like a Disney movie, the characters, particularly Eleka, are pretty endearing. That relationship is actually a lot more interesting than it seems at first glance, especially considering how the game ends, and is probably another of its more interesting qualities. More on that later! 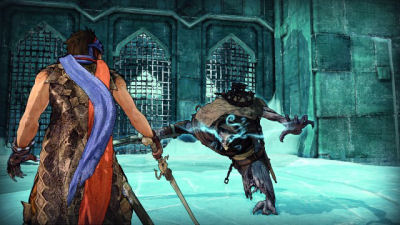 “My stomach turns just seeing a screenshot of these horrible boss battles.”

The core of the game, the platforming, was pretty enjoyable once I got into it. The addition of the gauntlet and Eleka’s double jumps are nice touches, adding some plausibility to some of your otherwise highly unrealistic moves. Yes, the platforming is relatively easy with most of the precision being stripped out for automatic locking on to the appropriate places for jumping, grabbing, and whatnot but it feels very fluid and is interactive enough not to be a total cakewalk. Think Prince of Persia: Sands of Time meets Assassin’s Creed. That said the hand-holding can be a bit excessive – there are worn down spots on the walls where you’re supposed to wall run for instance, and if all else fails Eleka can summon a Fable II like breadcrumb trail show you where to go. I used this breadcrumb trail constantly when moving from area to area or trying to make my way to the area boss – I rarely needed it to figure out how to navigate the obstacles but it was great for pointing me in the right direction. It was just too convenient! Despite all of this “babying” I never really felt like the game was any worse off for it.

While figuring out how to navigate an area or room is certainly a major component of the gameplay in this type of platformer I didn’t really miss having those mysteries 90% solved most of the time considering how long the game felt. Clocking in at somewhere between 10 and 15 hours it felt just a bit excessive to me. Yeah, I know that isn’t that long for a game but, man, it’s a long time to do the same formulaic area progression over and over again. Here’s how it works: the world is divided into a hub and areas branch out from there. You need to go to each area, navigate to the boss, beat the boss, then backtrack to collect “light seeds” (orbs) then move on to the next area. The orbs let you unlock additional areas. There are a lot of areas with not too much in the way of variety and no real character progression like new skills or abilities along the way. I would have definitely preferred a more linear progression as in older Prince of Persia games – I don’t really see any advantage to doing it with this hub system, in fact all giving me a choice did was make me all too aware of all of the work I was going to have to do to get to the end. Blech. 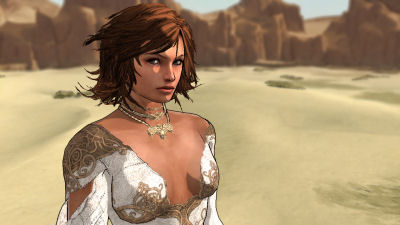 Oh, and back to the subject of the game’s difficulty real quick: Yes, Eleka will save you every… single… time… you die. Yeah, it’s kind of cool, yeah, it does seem a bit silly when you die 10 times in a row trying to make a particular jump, and yeah, it does make you nigh immortal, but really this is just a clever way of masking what is basically just a normal checkpoint system with a beyond generous amount of checkpoints and a nearly seamless reload. Did I prefer Sands of Time’s humorously narrated backpedaling? Absolutely, but this is not a problem.

Now to some stuff that is a problem! The platforming sometimes involves using various “power plates” that are spread around the areas. These plates do different things, such as teleport you or send you flying across the map. While these seemed quite cool at first glance, two of them, the one that lets you scurry around on walls, and the flying one, have this absolutely silly element of having to steer (slightly, it’s on rails) in order to avoid obstacles. Well, the controls on the wall running part are shit and the camera on the flying one often fought me, and guess what happens if you hit an obstacle? Instant death! Yes, Eleka saves you as usual… but you have to start what is usually one of the longer sequences of platforming in the game all over again. Pffft. Frustrating! 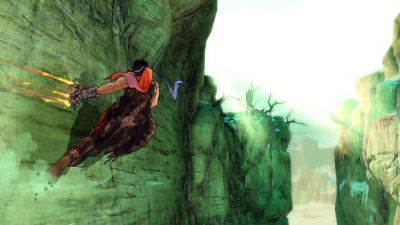 “Yes, he drags his gauntlet everywhere. Ladies dig the sparks.”

The other thing? Combat. I HATED the combat in this game. Absolutely hated it. At first I was trying my usual button mashing approach that has served me so well in other, similar 3rd person games but even after figuring out the simple, almost QTE like, rhythm to executing combos I still hated it. It just wasn’t fun and unless you lock in some huge combos combat can potentially take way, waaaayyy too long. Eleka will save you here too, by the way, but your opponent will get back a massive chunk of its health every time. Pfffft! Speaking of QTEs, yes they’re here too. How fun! Occasionally a prompt would go away before I had time to react, other times I clearly appeared to hit it in time but still didn’t register. Ughhhhhh… kill me now! So yeah, fuck that! The only saving grace here is that combat is relatively rare and somewhat easy to avoid – really, the boss fights were the only times I needed to worry about it once I got into the swing of things.

Finally, the ending. Wow… what? I don’t want to spoil anything but the game ends somewhat predictably… at first… and then leaves you with your only course of action to do something that, frankly, I didn’t want to do. I suppose that if the game did a better job at building up the relationship between your character and Eleka, or even just fleshed out Eleka a bit better in general, I might not have thought twice about whether it was worth undoing all of the work we just spent the last 15 hours painstakingly fighting through but as it was it felt extremely forced. This led me to question whether your character’s relationship with Eleka was meant to be as atypical as it felt, or if something in the script was just totally lost somewhere in production. Hmph. 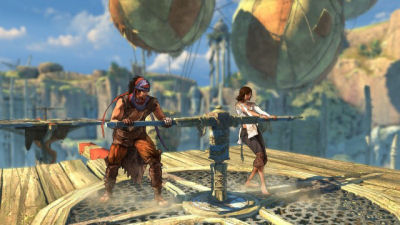 “Eleka doesn’t just save your ass constantly, you also put her to work.”

Anyway, I decided to keep the ending, which is somewhat open ended and mysterious, intact by not buying and playing through the $10 “Epilogue” DLC which goes on to flesh out the ending a little by showing you what happened next. From the various reviews I read the addendum to the story was unnecessarily with many people preferring the original ending. It also seems that they attempt to ratchet up the difficulty slightly, apparently prioritizing a lot of the things that I didn’t like about the core game. So yeah, easy decision for me!

So, over all, interesting game. Good if not a bit more accessible than usual platforming and a beautiful world brought to life by a unique art style and high production values all around are the highlights here. I’d really have no trouble recommending it to anyone if it were a much shorter or at least slightly less tedious playthrough but otherwise I’d probably only really recommend it to Prince of Persia fans or fans of this style of 3D platforming in general. That said, I picked up my copy for dirt cheap so perhaps you’ll find it in a bargain bin and won’t be able to pass it up.

Screenshots borrowed (and possibly not from the Xbox 360 version.)