This weekend gave me the biggest span of game out worthy free time I’ve had in quite a while and to be honest I didn’t quite know what to do with it all. I started out on Friday night by packing in a few hours of Grand Theft Auto 4. On Saturday morning I spent a couple of hours working on my latest round of Armed Assault scripting changes then I decided to mix it up a bit and play a couple of Xbox 360 demos – I ended up grabbing the Penny Arcade Adventures: On the Rain-Slick Precipice of Darkness demo as well as the Civilization: Revolution demo. While those (slowly) downloaded I played a ton of Pac-man: Championship Edition. On Sunday I got the urge to install Titan Quest Gold and ended up sinking a couple of hours into that. I wrapped up my evening by putting another dozen Pac-man: CE games in and grabbing two new achievements in the process.

I take a few different issues with GTA4 which I’ll expand on in a future post but overall it is great. I feel like I’m progressing very slowly through the story, however, and don’t feel like I accomplish much in a single sit-down with it which considering my fairly casual gaming schedule is a bit of a bummer.

The Penny Arcade game left me with mixed opinions. I’ve been a Penny Arcade fan for a long, long time, and still read it regularly. Their forums are also some of my favorite gaming forums to hang out at. Suffice it to say I enjoyed the hell out of both the humor and the artwork in the game. While it definitely feels like it has highly polished and well presented the game mechanics themselves left a bit to be desired. I have a feeling they’d work better with a mouse than a controller but I think I’ll settle for the 360 version so that I can grab some of the achievements therein. Yep, that means I’m planning on buying it although probably not until I have an entire day free in which I can attempt to beat the whole game in one or two long sittings. Maybe a slightly more in depth review when that happens.

Civ:Rev threw me for a loop. I’d dabbled with the first two Civ games in the DOS days but I’ve never been a big Civ guy which is odd since I do generally prefer turn based strategy to real time strategy and I’ve played a heap of RTSes. I’m not sure why I’ve never really explored the genre much but I’m thinking about picking up Galactic Civilizations II if that helps. 🙂 Anyway, it didn’t gel well with me but I had to end my game a wee bit early and, even if I didn’t, I was almost at the end of the demo anyway. Despite this almost as soon as I ended it I was pining to play it again. I suppose that is that legendary Civ addictiveness kicking in! 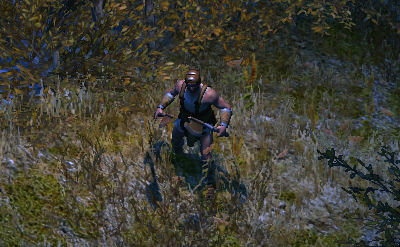 “Yeah, I took a picture of the side of a fucking mountain. Go me!”

I bought Titan Quest Gold a while back after hearing about it and seeing screenshots of it here and there for a long time. I’m a big Diablo series fan and have, in the past, put forth some considerable effort into finding and trying some of the other Diablo clones out there. With that Titan Quest is definitely the best Diablo 2 clone I’ve tried so far! Nice 3D graphics, good artwork, mostly smooth gameplay, a decent interface, and a great setting. I can’t wait to put more time into this and considering how long it apparently takes to beat I just hope I don’t get burnt out before its over with.

Pac-man: Championship Edition is awesome. I don’t have much to say about it other than that it amazes me how well Pac-man‘s gameplay has aged. It is still fun and the intense feelings I did when avoiding some really pissed off ghosts with no more lives, barely missing them, and pulling off some generally ballsy trickery is rarely duplicated in modern games anymore. If you’re even somewhat of a fan I urge you to get Pac-man: CE a try. I’m currently working on trying to “beat” the “Challenge 1” mode. I’ve developed a strategy which I’m pretty sure will take me there but it is taking a bit of time to work the kinks out of. Still, I managed to grab the King and 200,000 point achievements attempting it. Damn, this is another game that is stupidly addicting – I wish I could play it RIGHT NOW!

Note: I don’t have any good system for taking screenshots of console games yet. I’ll probably just end up snapping some crude pictures of my TV with a digital camera. Lame.