I mentioned back in May that I planned to play F.E.A.R 2: Project Origin next but I decided to take a bit of a detour. You see, I came home from running some errands one otherwise beautiful day to find that my house had been broken into and a small assortment of my stuff had been burgled. They took all kinds of heartbreaking and distressing stuff, but as far as the scope of this blog is concerned, luckily the thief only took the few Xbox 360 games that I had out at the time, including F.E.A.R. 2. Much worse, they took my Xbox 360 itself which means I lost years and years worth of old saved games, some of which I had hoped to use to play some of the many sequels collecting dust in my backlog, but I digress. I wasted little time tracking down a decent second hand copy of F.E.A.R. 2 but still being quite bitter about the whole thing I decided I really needed a palate cleanser first: fresh off of my Xbox Live Arcade backlog, Jet Set Radio HD! 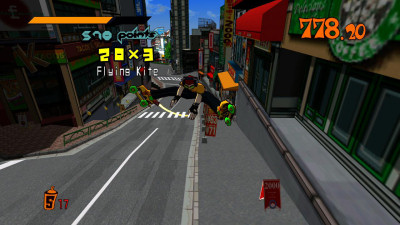 Jet Set Radio (or Jet Grind Radio for us Americans) was a first party Sega Dreamcast game and a total classic to those of us who got into it. The game featured a colorful, semi-open world full of graffiti painting, rollerblading gangs realized in a unique cel shaded graphical style with a bizarre, fun soundtrack and a quirky Japanese sensibility about the whole thing. It’s a hard game to describe in a way that really does it justice. Liking extreme sports, graffiti culture, weird music, and quirky Japanese style myself, the game struck a chord with me and I found myself making my way through to the end of it and coming out on the other side quite a fan. Furthermore, the game’s sequel, Jet Set Radio Future, was one of my main justifications for buying an original Xbox.

This HD release of the game does little more than “up-res” the game to widescreen HD and add a couple of minor enhancements such as slightly better camera control. The models aren’t any more detailed, nor have the textures been improved, but this works fine as the simple, cel shaded style running in HD looks pretty much how you’d remember the game if you played it originally and conveniently forget that it was (probably) running in standard definition on a blurry CRT TV like most of us tend to do when we remember old console games. Really, I have no real complaints about the port itself, and I still love the frantic, crazy soundtrack, the unique graphics, and the weird, almost Katamari-like world, but the gameplay… ugh, the gameplay! 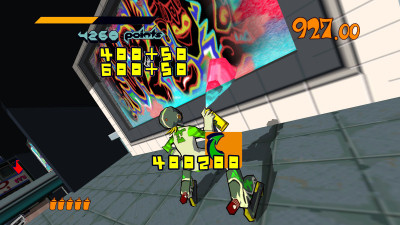 Its sequel, Jet Set Radio Future, was an interesting game because it was almost as if Sega took all of the original design documents for Jet Set Radio and simply handed them to a different development team to interpret. In some ways it feels like a remake of the first title – the same characters, though re-designed, similar levels, but again, not quite the same, the plot feels very familiar too, but the gameplay is where the game turned into something else entirely. Jet powered rollerblades and graffiti? Check! Except JSRF was about skating and grinding around quickly and cleanly, and exploring, platforming, and collecting in huge levels. The original JSR, on the other hand, was more of an arcade experience. The levels were small and predictable, and despite the time limits and constant harassment from enemies (who couldn’t be defeated, you just had to deal with them) it wasn’t all that fast. Your score was supposed to be a big deal, and you were always having to race against the clock and your lack of spray cans. Oh and in case it doesn’t sound like it already, it was also, at times, fucking frustrating. 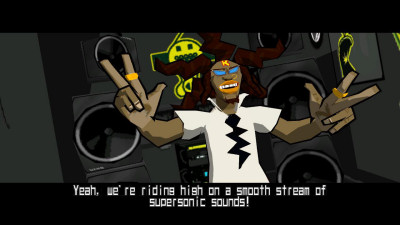 I definitely had some nostalgia blinders on and I hadn’t really recalled how much I felt like I had to force my way through it until playing it again and those old, buried annoyances came rushing back up to the surface again. The biggest source of frustration is that the controls feel slightly less precise than what the game requires of you to execute and, when combined with some of the related skating mechanics feeling like they could use a little more polish, made the challenge feel just a little unfair at times. It’s subtle and hard to really pin down, which really only adds to the frustration. To think, we were playing it with a Dreamcast controller to boot! While JSRF, being a 3D platformer, had plenty of frustrating moments itself, the more refined controls, the increased sense of speed, and the lack of time limits and invincible enemies, made it all feel like a much more enjoyable experience. Indeed, a lot of the memories I had of Jet Set Radio turned out to have actually been from Future. Oops! It should also be noted that I suppose that statement puts me on the JSRF side of a very divisive debate among fans. *shrug* 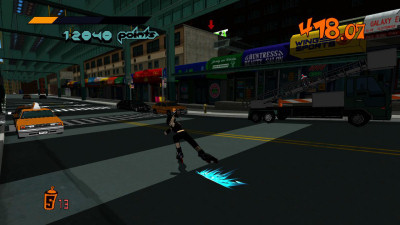 So, the game wasn’t exactly the comfort food I was hungry for, but it was still a fun experience once I got used to some of its quirks and annoyances again, and goddamn if I don’t have Super Brothers stuck in my head just like it was 2000 all over again. That said, please Sega, release Jet Set Radio Future HD!

One really cool thing about this HD re-release is that the series is now available on PC for the first time, which is why I managed to steal such good screenshots for once.