Some slightly depressing news dropped yesterday. Straight from the source it looks like UGO has bought 1UP, killed 1UP’s remaining print magazine EGM, and apparently canned most of the staff including almost all of our beloved podcast personalities. They say the intend to keep the site up and there are vague whispers from some of the few people that remain there about the possible return of some of the 1UP podcasts but, even if that is true, they won’t be at all the same without the same people being involved.

I had been listening to the 1UP Yours podcast on and off for a long time and catching it every week for more than a couple of years now and it was almost certainly my favorite podcast. Sure, it had it’s ups and downs with staff coming and going but as a whole I liked it a lot. Eventually, after hearing Jeff Green on it a few times and being familiar with him from CGW I supplemented my weekly 1UP Yours digests with GFW Radio/Lan Party, and later 1UP FM and the occasional 1UP Show as well.

This may sound pretty silly to some of you but after listening to the same guys for so long discussing a topic I love and given the casual atmosphere of all of the 1UP podcasts I really felt like I knew some of them almost as well as I know some of my other online gaming friends. It is definitely a blow to suddenly lose contact with them all at once like this and I of course feel for all of them losing their jobs, especially during these economically rough times. On the bright side I’m sure many of them be hired on by competitors or even start up their own ventures much like the guys at Giant Bomb did. In fact we’re already hearing rumors of a new podcast hosted by Nick Suttner, Philip Kollar, and Anthony Gallegos (the core of 1UP FM) called Rebel FM.

It might not be surprising that EGM was laid to rest given that Ziff Davis killed off Games for Windows (AKA Computer Gaming World) last year and the general decline of print magazines (particularly tech related magazines) in the Internet age. I myself had been a CGW reader on and off for a long, long time and thought it was one of the more mature and well written gaming magazines out there. When CGW died I started getting copies of EGM in the mail as a replacement and thought it was a decent read from time to time as well though it definitely wasn’t as good as I remember it being in the past. Still, listening to the 1UP podcasts for a while and starting to associate some of the names with real people made reading the articles written by the same guys much more interesting.

Yes, I know a lot of people absolutely scoff a the idea of print magazines these days given all of the great material to be found online but personally I still enjoy flicking through a magazine from time to time particularly when my eyes have had enough of staring into a monitor all day long. I really hope they don’t all completely disappear anytime soon but at the very least I’m sure we’ll continue to see the selection slim.

I really have a hard time trying to figure out what UGO’s scheme is with this buyout. For one, I’m not a UGO fan in the slightest nor do I really use any of their sites, while 1UP’s website and again, particularly, their podcasts have gained quite a lot of recognition in recent years. I get the impression that many gamers, at least the ones in the circles I follow, feel the same way. So UGO buys 1UP and kills off their biggest attractions and then lays off all of the talent responsible for it. OK, they still have the website but who is even going to come to the site without the podcasts bringing them in now? That’d be like some other burger joint buying McDonalds and immediately getting rid of the Big Mac or something. What do they really get out of this deal? Not only will the popularity of the website seriously diminish without the podcasts and print magazine and of course particular popular staff writers bringing in visitors but this whole deal is surely going to hurt the reputations of both UGO and 1UP. Did they just plop down a huge sum of money for some seriously negative publicity or what? I’m sure there’s a lot more to it but for now it boggles the mind.

The new MMORPG “Age of Conan” was just released a couple of weeks ago and I’ve been playing it heavily in my quest to find my ultimate dream MMO. While this clearly isn’t that game it is pretty cool and I like the Conan mythos quite a lot anyway so for now it is pretty entertaining. More on the broader subject of AoC in future posts I’m sure.

One interesting thing about Age of Conan is that there are several exclusive items that can only be acquired by dropping down some extra cash. It isn’t as crazy as some of these newer Asian MMOs where in game items can be bought left and right with real money but it isn’t necessarily too far gone either. There are a couple of items that come with the Collector’s Edition of the game, there were a couple preorder items, and then there is this one: “The Totem of Origins” which comes with the latest issue of PC Gamer magazine. 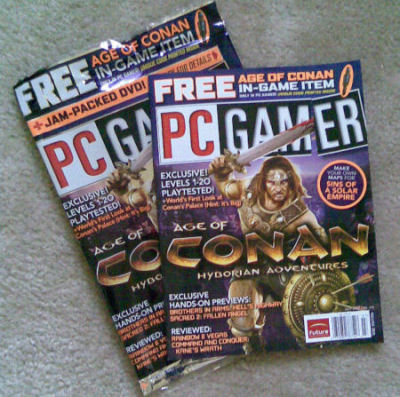 “What? People still read these things?”

Well, I’ve got to admit that I’ve got mixed feelings about the whole “pay for advancement/items” thing and really the whole issue of “microtransactions” in gaming period. Despite being somewhat against them in general I’m hypocritical as can be – I’m a total whore for these kinds of things. If I’m really into a game throwing out a few bucks here and a few bucks there for a rare item or ability doesn’t seem unreasonable at all to me and God knows I’m “really into” most of the MMOs I play even if only for a very short time. I guess as I’ve gotten older and my time is more at a premium I’d rather drop the cash than to spend countless hours grinding away most of the time. Combining my limited time and anti-grinding mentality with my love of collecting, and my obsession with MMO games is a recipe for fucking critical levels of impulse buying.

Anywho, I broke down and spent way too much time (and probably gas) trying to track down this latest issue of PC Gamer and finally found it last weekend. I entered my code and claimed my Totem of Origins yesterday and tried it out for the first time this morning. Pretty sweet item!

Here’s the lowdown: In AoC you have one “teleport” or “recall” type ability that, as exactly like World of Warcraft, lets you teleport to a single “bound” location (of which there is a limited, static selection across the world) once an hour. It is a pretty limited ability but it does save you a bit of time traveling on occasion and god knows you’ll be doing a lot of traveling all over the place while questing in AoC which is even more tedious than in most other newer MMORPGs due to all of the zone and instance loading screens you’ll encounter. 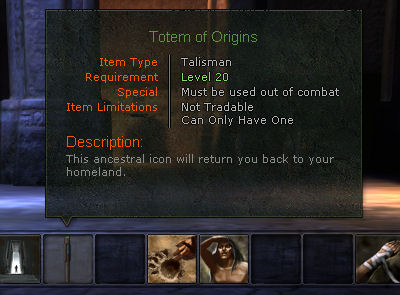 The Totem of Origins is essentially an item that casts that same ability, permanently bound to your faction’s capital city, useable once every 24 hours. This means you’ll almost never have to worry about binding to that particular city and, being on a different timer, it allows you to potentially use the two different abilities to travel between 2 places very quickly if needed. Pretty cool, especially since the 3 capital cities are regional hubs in the game and you will be traveling to/through them often. The item’s cooldown isn’t a huge bummer for me because with the hour cooldown on the other ability I typically only recall once or twice per session of which I usually only have one a day. If anything I’d actually say the biggest disadvantage of the item is having to keep it on you when inventory space is such a limited commodity in this game. 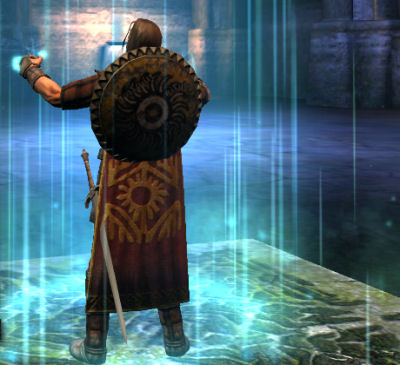 “Waiting for the “happy ending”…”

Is it useful? I think it might be, sure. Is it game breakingly powerful or otherwise unbalancing? Nah, definitely not. Is it worth the 6 or 7 bucks at the newsstand? That is the tricky one. On one hand, virtual item buying ethics aside, you’re paying god knows how much equivalent in game cash (the game hasn’t been out enough for those exchange rates to stabilize) for one item of limited use. On the other this is supposedly going to be a limited, fairly rare item. Once everyone who wants one snatches up these magazines the people who passed it up or came to the game later have no chance in getting it and that is what really seals the deal for me. Items are usually another way of customizing your character and having an attachment to your in-game avatar is very hard to put a price on indeed.