With Planetside on my mind and a lot of great memories welling up, I’m also reminded of one of my stupidest moments in online gaming.

As I mentioned in my last post I’m a big fan of Planetside and I’ve resubbed to the game many times, though because of the game’s many flaws I can never stay subscribed for very long before I get bored, annoyed, pulled away by something more enticing – at the very least I get my fill and cancel yet again. Shortly after renewing my account for the first time in many, many months I coincidentally received a new issue of Computer Gaming World in the mail that had a relatively small article about this huge new free expansion they were adding to the game that centered around the addition of what they called Battle Frame Robots, or simply “BFRs.” Mechs for you Planetside virgins.

Sometime later I was curious about what kind of idiocy was going around on the official message boards as a result of this (SOE’s Planetside forums were always a pretty hideous pit of bitching about the developers, flame wars over game balance and other perceived designed issues, and immature braggadocio) only to find absolutely zero mention of this new content being added whatsoever. Suspecting I might somehow be the first to know, but not 100% positive, I posted a purposely naïve sounding message asking what people thought of the new content. Call it trolling if you like, but there wasn’t really any ill intent.

The first several replies to my post consisted largely of people questioning my sanity, but many others were intrigued and wanted to know more. I then posted a link to a picture of one of the pages of the article. I quickly grew tired trying to explain what I was on about and just posted high resolution scans of the entire article and tried to limit my number of replies as the replies grew more and more heated. 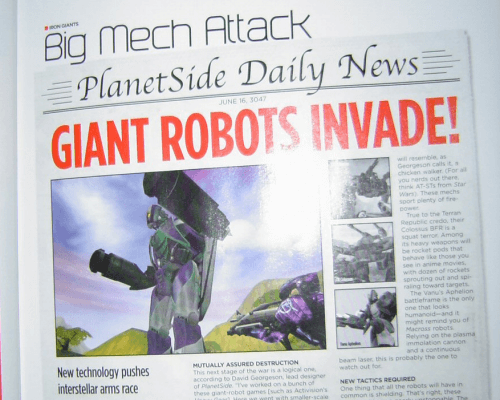 “The bringer of evil.”

The absolute torrent of flames and accusations hurled at me was truly something to behold. The board absolutely erupted into frenzy as thread after thread was created on the subject. I was amazed as I watched things I obviously knew to be 100% fact get torn apart and debated incessantly. Some of the amazingly intricate conspiracy theories people came up were quite fun to read though I’ve got to say. A large number of people replied to my posts or PMed me asking for more proof, wishing I’d die in a fire for being a filthy con man, congratulating me on such a brilliantly executed scam, and, most annoyingly of all, bluntly declaring that I was a liar and betting millions of combined dollars that everything I had posted was pure bunk. Insert some great revelation about “John Gabriel’s Greater Internet Fuckwad Theory” here. I admit that after awhile I started throwing out some purposely snarky and slightly misleading replies just to mess with people since I knew the actual, verified truth would eventually come out.

After another day or two of this madness the devs finally responded and confirmed that what I had posted was true. Believe it or not, I didn’t get a single check in the mail or even an apology in my inbox. *sigh* Still, it was pretty exciting being the most infamous person in an entire MMO for a couple of days and some deep down, maniacal part of me got quite a big kick out of watching all of the chaos I had caused.

Here are some fun supporting links:

…and all that is just a small sampling!

It’s funny. BFRs were hated by a large portion of the community the second I posted about them but they were even more hated once they finally made it into the game: as many of us had feared they were grossly imbalanced and the game suffered as a whole due to their addition. Eventually they were nerfed over and over again until they were just another vehicle on the battlefield, albeit still an extremely powerful one, and the process of acquiring them, never mind them actually being on the battlefield, altered the general flow of combat from then on. The controversy still lives on as you can see from the celebratory comments on this news item announcing that BFRs apparently won’t be reappearing in Planetside 2. I, for one, actually liked the idea. 🙁

Edit 2021: All of the SOE forum links are dead now, unfortunately. Thus is the nature of online forums, I guess. The PSU one is still alive somehow, though. I also added a clip of the original controversial image to the post! As an aside, re-reading this now, I hate to think I might have inadvertently fucked over a PR push for this new expansion that could have helped the game. Still, if it wasn’t me, it would have been someone else. I also have to wonder if the way that BFRs were… announced, as it were, actually made a difference in how they were received. I guess we’ll never know.