As predicted my next 360 foray was Halo 3: ODST. ODST has pretty much been talked about to death lately on all of the gaming forums, blogs, podcasts, and the like so I won’t go into it too much. I played through it co-op via splitscreen on Heroic difficulty and enjoyed it quite a lot. It’s nice and short but well paced and a lot of fun. If you’re a Halo (particularly Halo 3) fan then this is a must buy despite the lack of the iconic Master Chief. I plan on going back and getting more of the achievements, including going after all of the audio logs, in a subsequent playthrough sometime soon. I also dabbled in the new Firefight mode a couple of times with some friends and, as predicted, enjoyed the hell out of it. There’s just something to be said for working together with friends in just about any game and the Gears of War 2 “Horde” mode template that everyone has been shamelessly copying lately really seems to nail a certain pure aspect of that. 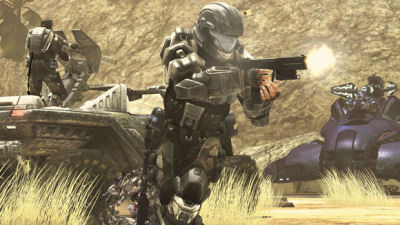 “Silenced pistols are the new black.”

Next up I decided to play Lost Planet: Extreme Condition on my 360. Why? I don’t know. Perhaps it was the ever increasing nip in the air around here as we move into the fall that made me want to jump head first into Lost Planet’s abundant virtual snow banks… or maybe I just dig mechs? Who knows. I remember thinking the game looked cool since well before it was released but until the relatively recent announcement of its upcoming sequel I feel like it has been overshadowed by newer games. I’ve got a couple of friends who really dig the game though and one of them, NetworkShadow, even demoed it for a few of us at his place one day not too long ago. I really got into the idea of trudging through the beautiful snowy environments. The graphics might be fairly dated nowadays but people were blown away by them at launch and they’re just stylized enough to remain easy to appreciate even now. 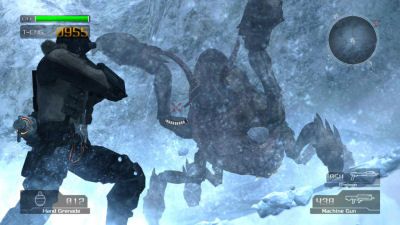 I managed to beat the game in just a few sittings and although there were some tricky sections (including lots of old school set piece boss battles) I found the game to be fairly easy. In fact a lot of my difficulty came about from trying to collect the achievements for all of the “target mark” collectibles for which I had to replay a few sections, even a few entire levels to complete. The character’s movement and control felt slightly off to me (though admittedly I play relatively few 3rd person action games) but once I got used to the controls it all felt quite smooth and I was generally quite happy with it. I was a little disappointed by the last boss fight which hit on a pet peeve of mine – throwing entirely new game mechanics at you in the last level. I didn’t feel like Lost Planet’s case was as gross as a lot of other game’s and I once I got a good feel for it I could more or less tell what they were going for. Still, it was fairly annoying and I ended up having to replay it like 15 times before I finally managed to beat it.

Lost Planet is also one of those newer Capcom games that seems to heap on a large amount of Western influence for some mysterious reason I don’t suppose I care enough to speculate too much about – something about increased international sales or a bold new direction or something, I don’t know. Indeed the game reminds me a lot, the setting, graphics, control, and the core gameplay, of a lot of Western 3rd person shooters, however there is an unmistakable Japanese feel to the entire game. I’m not just talking about the often silly extended cutscenes but the game itself often feels like somewhat of a 3D take on an oldschool side scrolling shooter like Contra or something. It’s hard to explain but I’m sure some of you who have played it know where I’m coming from. Regarding those cutscenes though, I’ve got to say that not playing many Japanese games, particularly the cutscene heavy JRPG genre, I do find an occasional dip into the cesspools of insane Japanese cutscenes to be pretty refreshing. 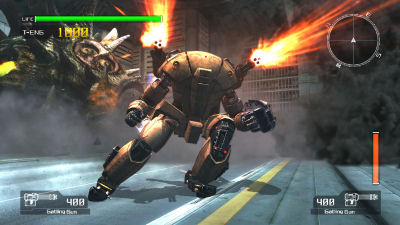 Next up for the 360 is Call of Duty 4: Modern Warfare. An interesting note, and one I remember mentioning once or twice on the old podcast, is that I’ve had Call of Duty 4 since right around the time it was first released. I had the PC version and only really bought it to play multiplayer with friends however. As a result I never even started up the single player campaign and somewhere in the back of my mind I had always figured I’d probably enjoy it more on the Xbox 360 and that the achievements wouldn’t hurt either. So, here I am, nearing the release of Call of Duty: Modern Warfare 2, and I’ve finally tracked down a decently priced used copy of the game for 360. I can’t wait! I’ve heard so much about the campaign and, who knows, I might even give multiplayer on Xbox Live a try while I’m at it since it’s such a blast.

On a non-console related note I also continue to play Half-life 2 from time to time – I’m about to start Episode 2 and wrap the game up. I’ll talk more about Half-life 2 in a separate post when I finally get around to finishing it.