The Fame and the Fury 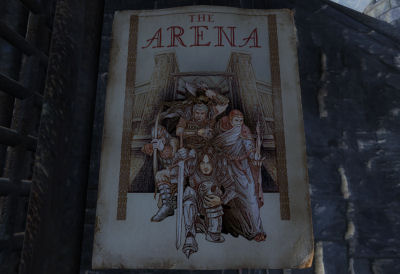 Having left Modryn Oreyn to see to my Fighters Guild business I decided that it was time for something a little different – some much deserved time off, perhaps. I returned to the capital city to plot my next move as well as finally offload the considerable spoils that I had amassed in the previous months to the usual storekeepers and traders in the Market District. During this time I finally, mostly out of curiosity, visited the Arena. After watching and betting on a few low and mid-level gladiatorial matches I began to wonder if participating myself might be a good way to earn some extra gold while I was taking some time off of adventuring. It had also occurred to me that mingling with other gladiators as well as appearing in front of such a large audience could finally give me a break or at least some hints to discovering my still unknown past. 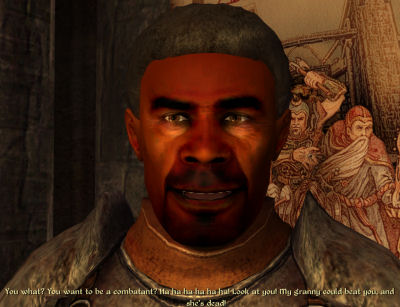 “That joke would probably go over a lot better in a place not so filled with necromancers and undead abominations.”

Owyn, one of the Blademasters in the Arena and the one that everyone directed me to speak to about joining, was at first entirely dismissive of my interest in becoming a gladiator even after I offered him my Fighters Guild credentials. After I returned a second time, wearing my full armor and adventuring gear, he seemed to take much more interest in my claims and decided to offer me a spot, though only as a lowly “Pit Dog”. It was no matter, I was sure I could rise through the ranks rather quickly and was actually fairly relieved that I would be built up as anything too remarkable. 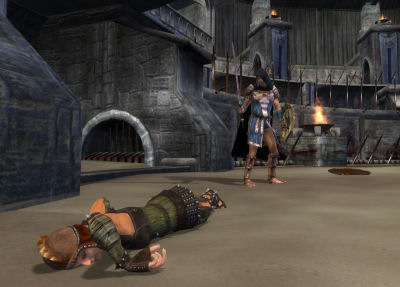 My first fight was a surreal experience: walking up the ramp from the Bloodworks while listening to the announcer describe the combatants, being blinded by the sun as I stepped outside, drawing my sword and kicking the dirt under my sandals as I waited for the gate to open, and the monstrous roaring of the crowd as I effortlessly blocked her attack and cleaved my Daedric blade into my Bosmer opponent’s side. While the fight wasn’t any more difficult for me than it would be taking on a more aggressive bandit or marauder the stage of exhibition made the whole thing feel like something much different. I held up my hands and the crowd went wild. I had won my first match. 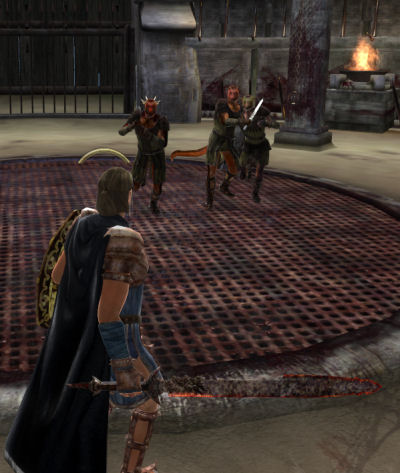 I fought a match or two every two or three days advancing through the ranks until I came to one of my first legitimate challenges. As my initiation for reaching the “Gladiator” rank I was to fight three Argonian prisoners. They were only lightly armed and protected but if they won they were to be given their freedom – a more meaningful prize than I or anyone else here was fighting for. I knew that they would fight hard and indeed they did. While I tried to pepper them with lightning and fire spells to keep them at a distance they were too quick and soon cornered me. Distracted by the melee, I let one of the three got around behind me and he began trying to choke me to the ground. It was a desperate fight for all involved but soon I was able to drop my first Argonian, and then a second, until finally it was just a one on one competition. The last Argonian and I circled each other, both out of breath, but not taking our eyes off of one another for even a moment. When he finally sprang for me I rolled under his swipe and swung at his legs, slicing into his calf and sending him tumbling into the dirt. I leaped to my feet and drove my blade into his chest as he struggled to gather himself. Another glorious victory – I was starting to get addicted to this.

Soon my reputation for decisive wins was gaining me some considerable fandom. Owyn told me that the crowd had nicknamed me “The Crimson Blade” after the strange red metal of my Daedric longsword. Enjoying this, I adopted the name officially rather than trying to further advertise my true identity. After all, I was pretty vulnerable to assassination attempts while fighting in the Arena and I still didn’t know who could be after me at that point. 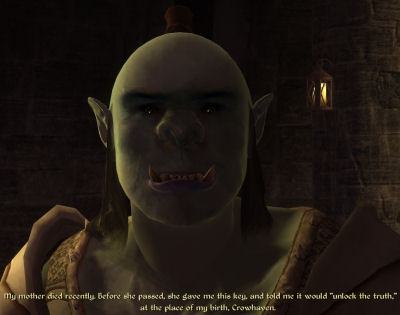 “Dude, I hate to tell you this but your mom was kind of a dick!”

I also began to befriend some of the other gladiators including the enigmatic “Gray Prince”, the current Grand Champion of the Arena. His real name was Agronak gro-Malog , a half-orc whose fighting ability was legendary and whose whole life seemed to be wrapped up in the honor and fame of gladiatorial combat. Still, there was one thing that seemed to distract him: upon hearing that I had spent a considerable time adventuring he told me about how his father was a Lord but due to him being born out of an affair he was never able to claim his birthright. He proposed to me that if I were still up to adventuring I should enter the ruins of an old fortress called Crowhaven to look for proof of his noble birth. He even had a key which he believed would get me into the inner chambers of the fortress. As I respected Agronak and his request seemed steeped in sincerity I took a brief break from my regular Arena fights to honor his request. 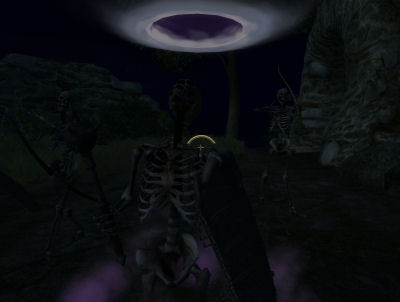 “Great, I haven’t even set foot in the place and I’m already facing hordes of enemies.”

Crowhaven had definitely fallen into ruin yet it wasn’t quite abandoned. I encountered a variety of undead creatures lurking therein with increasing frequency until at last I was ambushed by a vampire, and quite an aggressive one at that. Having survived the attack (though sustaining some minor injuries) I continued searching the fortress only to discover some disturbing knowledge: evidence of Agronak’s birth indeed, but apparently his father, Lord Lovidicus, was a vampire. In fact, he was the very vampire that I had just slain! I gathered up all of the pertinent information: a journal and some letters and quickly returned to the Imperial City to tell Agronak the news. He was thrilled about my return but refused to hear me out nor to read what I had brought back until he had finished his training regime. Talking to him the next day it was evident that he was devastated by the thought of being what he considered a spawn of evil. It was not my place, nor was I of the heart to console him on such matters. 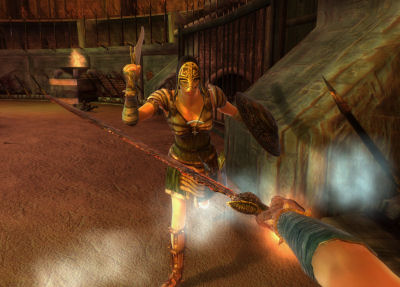 “The Champion and I square off.”

I continued to rise up through the ranks and gain more and more popularity until, after surviving another rather outmatched battle, I finally gained the rank of Champion myself. I had risen to the top but to truly test myself I decided to do what few had done before me and challenge Grand Champion, The Gray Prince. 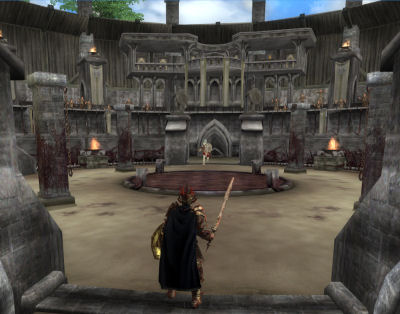 “Here goes nothing… no, literally. What a disappointing fight.”

Agronak rushed me and swung at me with a ferociousness and anger I had rarely faced in all of my battles – the rumors of his excellent swordsmanship hadn’t been exaggerated. No sooner than the thought having only just occurred to me that I might have finally met my match, I was shocked to see Agronak purposely lower his blade. “Do it!” he screamed. It took me a moment to realize what was happening but by then it was too late – my sword was already traveling with some speed swords his neck. I had done it, I had defeated the Gray Prince. The crowd was none the wiser about what transpired and I decided right there and then to keep it that way, to let Agronak’s memory live on in honor despite the self-loathing he held for himself after learning of his terrible origins.

I had bested all that the Imperial City Arena could throw at me, I had experienced the lifestyle of a famed gladiator, and I now held yet another position of prestige for whatever that was worth. Still, I was no closer to learning of my past. I hadn’t felt any twinge of familiarity whilst battling below the grandstands, I hadn’t run into any familiar characters from my past, nor had I appeared to have been noticed by anyone who was previously familiar with me me during the couple of months I spent as a dedicated gladiator. It was time for something else: more adventure, more work, but now it was time to look into my gift with the magics and pay a visit to the Arcane University.