I’ve had a few of the more well-known survival games in my backlog for a while now. No Man’s Sky has had my eye since it was first released, well before it was patched into a reportedly vastly improved experience, I’ve heard nothing but amazing things about Subnautica, and can’t wait to dig into that one, but it was Astroneer I decided to go with this time. Between the three, Astroneer looked like a much more casual experience, and I didn’t want to dedicate myself to some massive galaxy spanning adventure or spending several tense hours cowering from giant alien shark-beasts in some underwater cave. Not yet, at least. 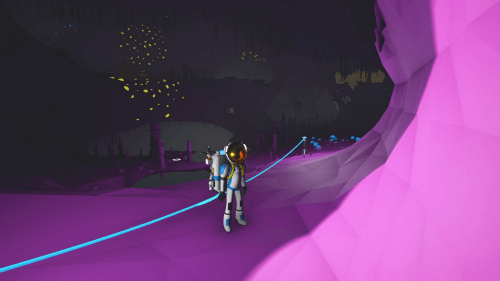 As luck would have it, it turns out that Astroneer actually scratches an itch that I don’t believe either of those games would have. That would be the same very basic mining and caving gameplay loop that Minecraft’s survival mode employs. While plenty of other games have implemented much deeper and/or more interesting survival modes since Minecraft first blew up, that particular aspect of it has always been left by the wayside. Whenever I’ve gone back to Minecraft, that always seems to be the most compelling component for me. Playing cooperatively with my girlfriend, she’d often be the one crafting and building, while I’d spend almost all of my time digging out elaborate mines and exploring the game’s massive, randomly generated cave systems when I’d encounter them. When it comes to those aspects, Astroneer absolutely delivers.

The basic premise of the game is that you’re some sort of an astronaut dropped onto a planet and, well, it’s not readily apparent what the fictional reason for your mission actually is, something vaguely related to gathering research, I guess? From a gameplay perspective you’re immediately thrown into a classic loop of gathering material to build upgrades, to gather better materials, to build better upgrades, and so on that just about every survival game incorporates to some degree. The difference is that Astroneer focuses entirely on that loop – there’s no additional survival elements related to eating food or water, staying warm, etc. nor are there enemies or many other direct threats to your character. Your only survival concerns are oxygen and the occasional dangerous variety of plantlife, which are usually easy to avoid once you’re aware of them. 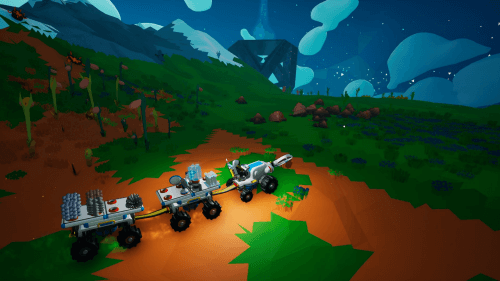 “I spent countless hours trekking around the surface too.”

So, that pretty much leaves you with mining, exploring and scavenging, and upgrading your base and equipment. Eventually this has you even leaving your starting planet to head to another one of the other 6 planets and moons in the solar system for a change of scenery and access to some new resources to mine or otherwise gather. It’s a relatively simple and fairly open-ended game, with little in the way over any sort of overarching goals that you don’t set yourself, which, when combined with the game’s beautifully clean, stylized visuals and excellent, minimalist soundtrack, make for an extremely relaxing experience, whether played alone or cooperatively. I spent way too many nights unaware of how much time had been flying by while I was deep into a grinding session.

Sure, there can be some stress, like when you accidentally fall into a cavern, breaking your connection to your oxygen tether network, or end up getting lost for hours while exploring (damn you, shitty beacon system!) but overall Astroneer really nails owning this particular corner of the survival genre like nothing else I’ve played. I do have some other complaints, like the lack of split screen coop on the console version, and some fairly serious performance issues that seem to relate to the number of objects in the world (and likely those two things are directly related) but nothing close to a deal breaker. 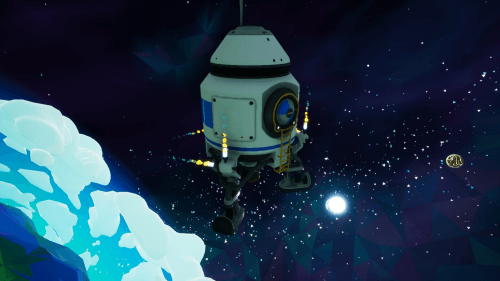 “…and when you get bored of that stuff, you can GTFO!”

That said, I’ve had my fill for now. While I wouldn’t say I “completed” the game, I accomplished enough to feel like I had more or less mastered most of the systems before it all started feeling too repetitive. I got most of my tech to tier 2 (of 3) and beyond, visited every planet, unlocked some cores, and just basically got a healthy taste of almost everything on offer. The biggest compliment I can give the game is that I absolutely think I’ll be back to Astroneer instead of Minecraft the next time I’m feeling a strange, primal urge to go delving into deep in pursuit of rare materials.

For a bit of a palate cleanser, I followed that up with a quick dip into Supergiant’s now something of a classic action RPG, Bastion. 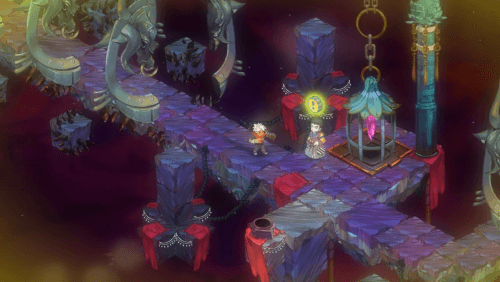 “In a stroke of innovation, NPCs with quests have exclamation marks over their heads!”

Bastion was one of the darlings of the wave of new, sexy indie games hitting Xbox Live Arcade back in the Xbox 360’s heyday, and it seemed like everyone was playing it for a time, the ever-present and extremely divisive narrator being a hot topic on every podcast I listened to. Having always enjoyed narration and frankly surprised it hasn’t been done in more modern games (cue flashbacks to Dungeons and Dragons Online) I was quite looking forward to it myself. A huge Diablo fan, I was far more skeptical about playing a colorful, consolefied take on the ARPG genre, which was honestly probably the main reason I hadn’t got around to playing it until now.

Immediately upon jumping in you’re treated to the game’s sublime visuals. A painted, colorful floating world filled with squat, cartoony characters that evoke isometric Japanese tactical RPGs from the 90s more than Diablo and its ilk is assembled around as you walk through it to cool effect. Then the narrator comes in and… well, that wasn’t what I was expecting at all! Instead of a narrator chiming in here and there, and feeling fairly removed from the game world like an overwatching dungeon master or the hilarious narrator from a Sierra adventure game, the narrator in Bastion is actually another character in the world with his own personality, and he really is ever-present, chiming in about every other little thing your character does. It’s not that it wasn’t cool, it just wasn’t what I had in my head for all these years. 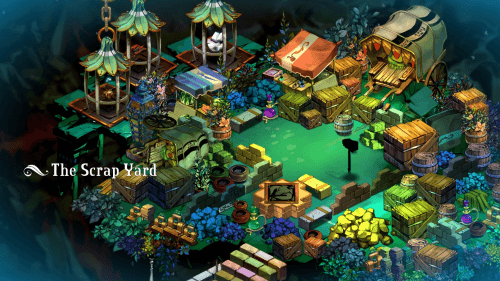 “Even Bastion’s junk yards are beautiful.”

Then I got into the action and, eh… it was fine. Nothing too particular to complain about, but something about it just didn’t click with me. I knew it was a short game, so I figured I’d keep playing it and at worst, have to write a fairly negative review. Then, maybe my third session in with the game, out of nowhere I found myself having a ton of fun. I think a big part of my enjoyment came from the extremely smooth pacing. Having such bite-sized levels was genius, making it feel effortless to dive in and out, which ends up being vitally important as you start unlocking new weapons, weapon upgrades, spirits, and secret skills to play with.

I’m the type of person who typically settles on one good loadout in a game like this and won’t deviate from it all too often outside of a cursory test of any new items and abilities I pick up, but Bastion absolutely nails its upgrade and loadout systems. Soon I found myself experimenting wildly to find the best ways to best each of the weapon challenge areas and the “Who Knows Where” wave attack arenas. I was actually having some of the most fun I’d had with a game like this in recent memory. 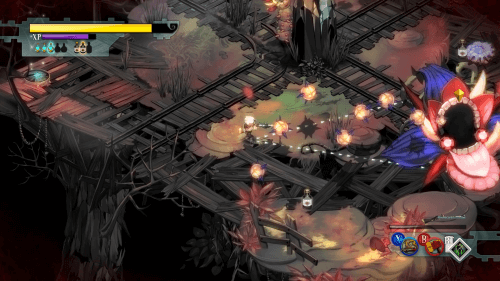 “When in doubt, use a shotgun.”

Once I was hooked on the combat and the progression, the intrigue of the story, the aforementioned beautiful art style, the amazing soundtrack, and really, just an overall highly tuned experience from front to back, brought me the rest of the way to the end of the game. I ended up enjoying it so much that I went from barely interested to now committed to trying some of Supergiant’s other games, like their 2014 follow-up, Transistor. Hell, I even briefly considered giving the new game+ a go, something I almost never do. In the end I settled on being happy with as close to 100 percenting the game as you can get in a single playthrough, and calling it a day. Still, that was a pleasant surprise!

Screenshots are from the PC versions of these games, stolen from random users on the Steam Community pages for these games.