Having burnt myself out on PlayerUnknown’s Battlegrounds and still yearning for a relatively tactical FPS on PC that I might be able to recruit some of my friends into playing, I had caught wind of Insurgency: Sandstorm. I played the original version of Insurgency a fair bit when it was still a Source mod and really enjoyed the combination of tactical squad combat and its brutally (if not totally unrealistic) pin-point accurate ballistics model. Insurgency turned into a standalone retail product at some point but I never got around to trying that version, though it was fairly well received. Insurgency: Sandstorm is its long awaited sequel. Watching a trailer and some preview coverage on YouTube it really looked like it was shaping up to be something amazing; the type of shooter that the grognards who still cherish a return to the days of the original Ghost Recon might go all in on, and as such it’s been on my watch list for quite a while now. 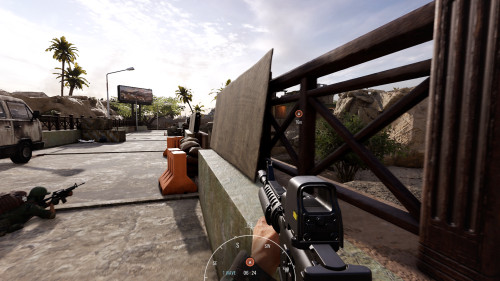 “Sloppily bounding towards our objective.”

This, unfortunately, might be one of those cases of something looking notably better when viewed from afar. Entering its final early access beta, I eagerly bought Sandstorm and jumped in to play some bot matches and was immediately shocked by how janky it’s previously slick looking gameplay actually felt and, if I’m totally honest, how ugly it looked in action (mostly the character models and animations) relative to the beautiful preview footage I had seen. After playing a few matches I started to enjoy the weighty feeling movement and the deadliness of the combat, being quite a departure from any of the other FPSes I’d been playing recently and something I’d dearly missed since the good old days of America’s Army 3. Still, knowing that there was no damn way I could successfully convince any of my friends that this didn’t, in fact, totally suck, I ended up quickly uninstalling the game and considering pursuing a refund.

This was just before launch, back in December, so to give it a fairer shake (to ease my regret for not getting that refund if nothing else) I’ll probably check it out in the future after its had a little bit longer to mature. In fact, installing it to grab a few screenshots has already left me with a better impression than I had last time around, and viewing update notes leaves me believing that it’s still being improved and supported quite well. For now though, the game mostly serves to remind me that I’m still quite capable for falling victim to my own hype. I should really know better by now. 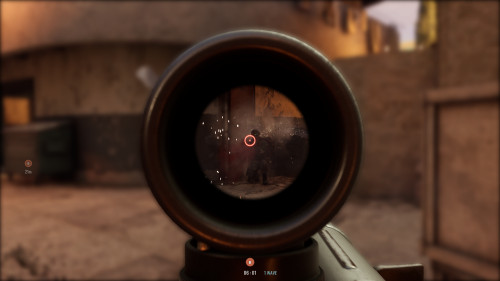 “Sandstorm’s damage model is quite brutal – a single direct hit pretty much takes care of things.”

Speaking of which, at around the same time I was randomly drawn to Conan Exiles. I honestly can’t tell you what it was that suddenly caused my interest to perk up, but I’ve always been a fan of Conan and I really liked the art style and overall conceit of the game. Seeing no real interest in playing this sort of game from any of my online crew, I generated a single player world and hopped in solo. For several intense days, including a couple of days during which I was stuck at home miserably sick, I was completely enthralled (*rim shot!*) but once I got the basic gameplay loop worked out, with a small but stable base of operations, and had seen a little bit of the world and what the game generally had to offer, I’d pretty much had my fill of what was increasingly becoming overly repetitive.

Despite abandoning the game pretty quickly, I actually really liked what I played. The graphics and overall design of the world were awesome, and the construction and tech trees were really cool. I admit, the world felt a little lonely when playing solo, but that’s on me more than the developers since it’s clearly designed to be played online. Honestly, I can easily imagine this being a game I’d have totally fallen in love with if I had played it online with a group of friends on an active, highly competitive server, not unlike the experiences I’d described in the past about my brief but memorable time with Rust (though with perhaps even more nudity!) Really, in so many ways, Conan Exiles is basically just a version of Rust with more polish and a setting that caters to my personal tastes a bit more, which is much more of a compliment than it probably sounds like it is. 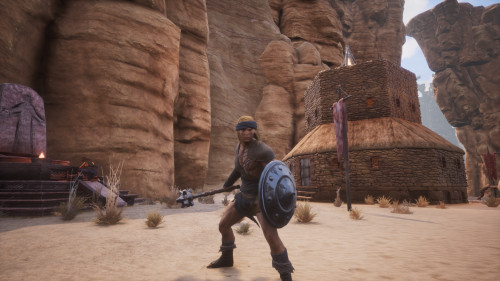 “Religion and slaves, check. Game over?”

Likely, I’ll install Conan Exiles again at some point, though probably with some mods installed to make the grind of playing solo a little more tolerable, and if any of my friends ever show any interest in playing I’d jump at the opportunity to hop back in and reinstall it in a heartbeat.

Shifting over to console, I’d been tempted to look at Xbox Game Pass since I first heard about it. The original allure was unlimited access to all of Microsoft’s first party Xbox One titles, which is fairly compelling in and of itself, but they’ve continued to add more and more great content to the subscription. Of course, they cycle it in AND back out from time to time, and they don’t really announce how often things get removed, so it’s a little hard to judge exactly what else you’re getting access to at any point in the future. Even still, as long as there’s at least a couple of games you intend on playing in the future, it feels like a no-brainer. I finally signed up and jumped into my first game not too long after, though I’m still working on that one so I’ll wait to talk more about it in my next one of these updates.

There are plenty of first party games I’m excited to play though: I want to get caught up on the Gears of War games, having enjoyed the first couple. I need to play Halo 5 finally, and also at least the first Halo Wars. State of Decay 2 is still looming large in my backlog too, and I’m sure there are many more. Being more than a little bit of a “patient gamer” I do find it disappointing to see some of the 3rd party games that originally convinced me to subscribe to Game Pass already leaving before I’d had a chance to play them, but I guess that’s just a part of the package. 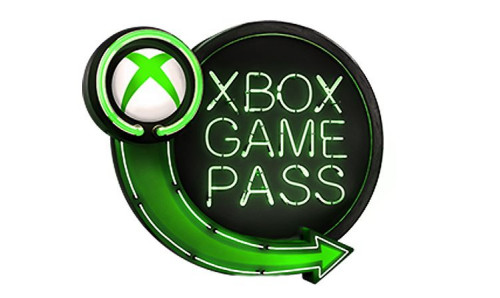 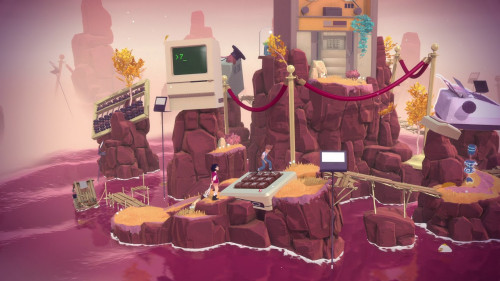 “Traversing the ruins of our childhoods…”

One game I did complete thanks to Game Pass is The Gardens Between. I hadn’t heard of this little indie gem at all until it appeared on The Computer Game Show podcast, where it unexpectedly ended up stealing their 2018 game of the year spot. I was already intrigued by the discussion and the fact that it was supposedly a relatively quick play, but then to find out I already had it on Game Pass? Sold!

The game’s first impression, with its vibrant, whimsical, and slightly cartoony art style, is definitely very positive, but indie games with brilliant graphics are (awesomely) becoming less and less of a standout quality these days. More unique, The Gardens Between’s gameplay is something else entirely. First, despite how it might appear from screenshots and videos, this game is a puzzle game first and foremost. Your two characters automatically traverse a series of small, surrealistic stages somewhat akin to an “auto-runner”. They’ll run into obstacles of various types while trying to reach the end of the stage and your role is to try to figure out how to get them around those obstacles – to solve the puzzle, in other words. 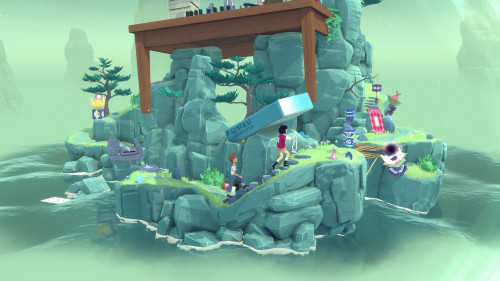 “Trickier than it looks, I promise!”

You don’t control your characters’ movements directly, rather your control comes from forwarding and rewinding time. I once heard someone describe this as being something like Braid minus the platforming which feels pretty apt. Even though your characters will follow the same path forward as long as possible, the obstacles in the world survive your time related antics which allows you to manipulate the environment around them. For example, one of your characters runs into a raised drawbridge where they get stuck but your other character ends up near a lever that lowers the bridge a little later. You then rewind time so that the first character can then cross the now lowered bridge. As you might imagine, these scenarios can get much, much more complicated, with you needing to carefully line up objects and movements typically quite a few times per stage, often taking some real lateral thinking. It can be a bit trial and error oriented too but given the ability to rewind time those “errors” are never really all that punitive.

There is also a narrative here. Involving childhood friendship, it clearly attempts to play on some fairly universal emotions. From some reviews and impressions I’ve heard from other people the game is plenty capable of really affecting you though beyond being overall fairly charming it didn’t quite pull my heartstrings in any major way. It did leave me wondering where it was going the entire time though which was interesting in a different way though. Still, all said and done, it was a great little game that I’d recommend if you need a palate cleanser between longer games or if you just love these sorts of odd puzzle games.

The Gardens Between shots were stolen from Google Images.