I had been planning on doing this for a while now and all of the buzz surrounding the release of Fallout 3 was the final straw – time to play through The Elder Scrolls: Oblivion one more time! I’ve never gone through the main quest entirely and indeed haven’t spoiled too much of it for myself yet either. I also have a ton of add-ons installed, most first the first time, including the legendary Oscuro’s Oblivion Overhaul. This should be an interesting adventure indeed. As this is the first one of these I’m doing don’t expect any miracles from it – it is mostly for my own amusement.

As I sit in my cell, lost in a combination of deep thought and a numb daze, I’m suddenly startled by a commotion in the corridor. Imperial guardsmen burst into my cell and violently push me into a corner at sword point. I’m amazed to see a figure clad in majestic garments who I soon find out is the Emperor himself escorted in. At first I’m absolutely stunned wondering what this could possibly be related to but it is soon obvious that their reasons for being here have nothing to do with me. They open a concealed passage in my cell wall and hurriedly proceed down into a dark passageway. 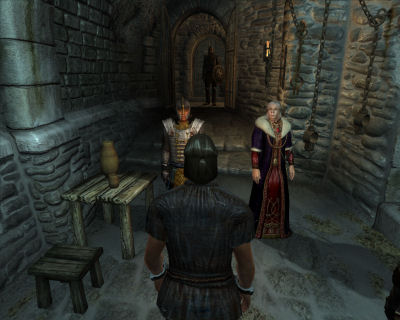 I’m dumbfounded – one of the last guardsmen to leave warned me not to follow the party yet he wasn’t able to seal the passage and here I stand. How can I refuse this temptation? I have to think for only a moment before step down into the darkness.

Despite trying to keep my distance from them I quickly catch up to the escort and it becomes obvious why they are in such a hurry – the Emperor is being aggressively pursued by a group of crimson robed assassins. Upon surveying the scene of the scuffle I make a snap decision and snatch up a fallen guard’s sword. I figure my best chance of escaping is to aid these guardsmen in the defense of the Emperor less be escorted back to my cell or put to the blade myself. 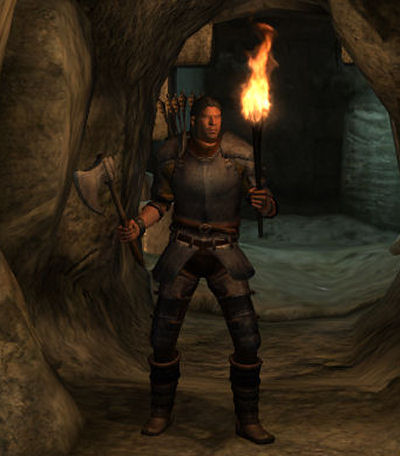 “Exploring the tunnels beneath the prison.”

A sword feels natural in my hand and I have little trouble helping to fend off the assassins. I also quickly discover my apparent familiarity with the forces of magic as, in the rage of combat, flames shoot forth from my hands to scorch one of my enemies. These are only subtle hints but this is more progress in remembering how I ended up in this prison than I have made in months of quiet pondering.

I’ve created a custom class based on sword and heavy armor combat combined with destruction, restoration, and conjuration magic abilities.

As we near the end of our journey through these old, disused tunnels the Emperor confronts me. Puzzlingly enough he insists that I have some greater role to play in his story and entrusts me with an artifact called The Amulet of the Kings which he says I must deliver to the leader of the order of his personal guard, a man named Jauffre, with the ultimate goal of tracking down his lost heir. This is quite strange indeed. The Emperor claims to have never met me before but, dreams or not, he clearly knows more about me than he is letting on. Before I have much time to inquire further an assassin finally completes his task and the Emperor is slain with a cowardly attack right before my eyes. 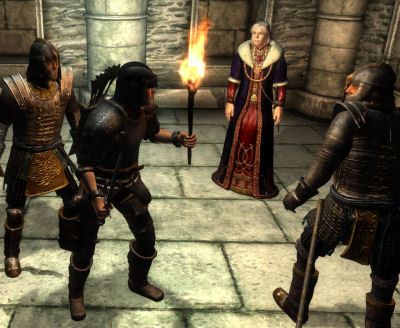 “Garn and the guards congratulate each other after successfully escorting the Emperor to the sewer entrance.”

Baurus, the last of the Emperor’s guard to survive the assault, interrogates me before pointing me in the direction of the sewers and insisting that I hurry on my way to deliver the amulet to Jauffre. Again, I’m puzzled. Why does Baurus trust me so much to deliver this amulet? How does he know that I’m not a conspirator myself? It seems clear to me that my mysterious past is catching up to me.