I know I’m amazingly late to the party with this one but I finally got around to playing (and beating) Fable 2 for Xbox 360! Between playing the original Xbox Fable at release and watching/hearing other friends of mine play through Fable 2 I was really, really looking forward to playing this one. Despite having a lot of fun with the game I somehow don’t really have a whole lot to say about it… perhaps I’ve waited a bit too long to write about it, but I’ll try to put down a few thoughts regardless.

Fable 2 absolutely oozes a style of its own: the odd designs brought to life by the colorful graphics, the unique (in gaming, certainly) 17th/18th century meets middle ages aesthetics, the funny voice acting, hilarious item descriptions, and all around healthy dose of humor injected into the world, and all of that brought together in what feels like a relatively well produced, high budget package. I was immediately hooked! 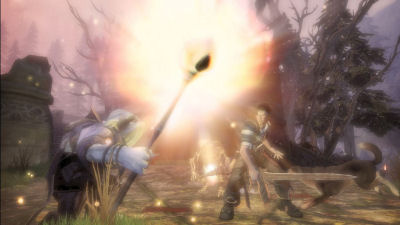 “Significantly less dangerous than he appears.”

The gameplay is pretty simple and very easy to get into and start having fun with – combat, for instance, is quite streamlined, just a button for each weapon type, and it is only much later, when you start improving your various skills, that the combat system begins to become gradually deeper. My main character was a mage and while I typically don’t play pure mages in these types of games the magic system felt a little odd and a bit limited. You can only have one of each spell rank equipped and you cast all 5 spells (there are 5 ranks) by holding the same button down for increasingly longer lengths of time. From poking around on the forums there seemed to be quite a lot of people confused about how to assign and cast your different spells. That said, once you figure it out it’s a breeze to use and quite effective. There were definitely a lot of other odd design decisions made with Fable 2, not just with magic. Knowing Peter Molyneux’s reputation for interesting, ambitious design I’m assuming that there were many, much more extreme ideas penned that were eventually dumbed-down or cut for various reasons. At the very least the game still succeeds in feeling fairly unique and doing so without too many negatives.

The two new features that got the most attention in the press, your canine companion and the sparkly golden breadcrumb traill, were both successes in my book. The dog was pretty neat and when he wasn’t around I felt myself actually feeling more alone in the world – I missed the little flea bag. I did somehow expect him to be a bit more effective in combat than he ended up being, but oh well. The bread crumb trail, which always points you to the next step in your active quest, only ever annoyed me when it wasn’t working correctly (I found myself occasionally outrunning it, which made me think it was trying to point me in the opposite direction, for instance) otherwise I found it to be quite useful and easy enough to ignore when I wanted to explore a bit. 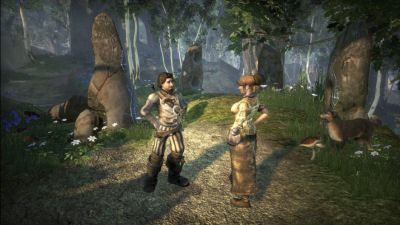 “You’ll probably spend way too much time hitting on peasant ladies (and/or dudes.)”

I was pretty surprised at how quickly I progressed through the plot, figuring Fable 2 would have a pretty epic storyline after the backlash about how oddly quick the original Fable went. I agreed with those original assessments, by the way. To me it seems like many of the mechanics of Fable, and even more so Fable 2, particularly the character development and customization over time aspects, cater more towards longer and/or more open world game but I concede that perhaps my views simply don’t line up with the designers’ intent. That was another thing – I had gotten the distinct impression that Fable 2 was much more of an open world experience than Fable was, despite still maintaining a strong central story. Eh, not so much… definitely improved, but still lacking something in the way of a truly open feel. Regardless I dug playing through the story and customizing and progressing my character. Many of the side quests just didn’t feel that interesting and I had a hard time forcing myself to even be bothered with them though, I admit, this may be partially blamed on not playing many of them until after beating the main storyline.

Speaking of side quests, I did end up playing through the two DLC add-ons, Knothole Island and See The Future, which both provide you with some short side stories including a variety of additional quests. Both were easy enough to skip but recommended if you absolutely love the game and want a little more. Knothole Island was my favorite of the two, with its Zelda-esque series of quests into different temples/dungeons. It also got me my beloved dog back. 😉

All around, a fun game – I’m still a fan of the series and Fable 3 is definitely on my wish-list now. As an aside, I didn’t purposely go after many of them but some of the bizarre shit you have to do for achievements in that game was quite fun. 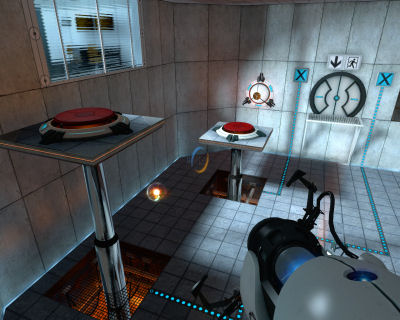 I played through the original Portal on PC again with the intention of refreshing myself before playing Portal 2. What’s to say? Still a fun game – especially given that you can breeze through the entire thing in just one or two sessions. Perhaps it is part of growing up and having less free time but I love shorter game experiences. It always amazes me that I managed to never get stuck for more than a minute or so my first time through. Knowing the way my dysfunctional mind operates I figured I’d bash my head against many of the puzzles – here’s hoping I have the same sort of luck with the sequel.

Finally, I recently picked up Frozen Synapse on PC. I’ve been hearing whispers about this game for what must be a couple of years now. They were offering a beta access for early buyers program similar to what Minecraft is doing but I decided to keep waiting out the formal release on Steam and that day has finally arrived.

The game is sort of reminiscent of the turn based, tactical combat found in games such as the original X-com and Jagged Alliance series, yet the mechanics give the whole thing a very different feel. Instead of being given a certain amount of time units, action points, or the like, you simply have to 5 seconds per turn and you can do whatever you have time to do in that window. It may be quite similar in principal but it is a little harder to know exactly what I have time to do and not do in Frozen Synapse without simply previewing my turn, though that is easy enough to do. In X-com everything you can do, from firing, to turning around, to moving, has a hard value associated it with it – such a thing likely exists in FS’s engine as well, but it’s just not presented that way. 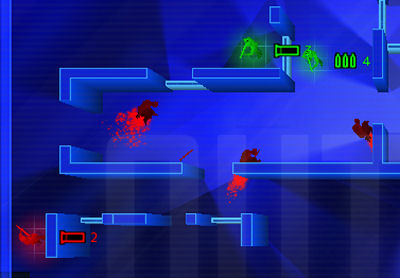 “Actually winning for once…”

Speaking of presentation, the interface is also some what of a departure from that style of game, feeling more like the planning stages of the old PC Rainbow 6 games than a typical turned based tactical game. Turns are also simultaneous which is another big difference from most games like this. I don’t know that it really ups the challenge but it certainly does make turns a lot more suspenseful. A major plus to this is that it is setup to allow for asynchronous gaming – you can be playing multiple games as once, swapping back and forth when your turn is ready. You can play by email, continue a half-finished game the next day, whatever. It’s very cool.

One thing that kills me about FS (literally, it gets me killed) is difficulty judging my line of sight and, particularly, my enemy’s line of sight to me. In one of my first online matches half of my squad got obliterated by a rocket blast that somehow slipped through 4 or 5 tiny openings that, because of the perspective, didn’t even look passable to me. I’d love a tool to clearly show me LoS views. Whatever… live and learn! I’ve been doing a lot of learning lately – my online record is currently atrocious. Most of my loses were very, very close… but it’s not like anyone can see that when looking at my win/loss record. 🙁

Anyway, it’s a fun game. It’s different enough that it doesn’t really scratch my X-com itch in the way something like Silent Storm did, but for a relatively cheap indie game that has good online capabilities and an active player base, I feel like it has been worth my money and time so far.

As usual, Xbox 360 screens lifted from elsewhere. Fable 2 was a perfect example of a game where I couldn’t find much in the way of ACTUAL screen shots, showing the game as it looks when it is being played with interface and all – mostly only canned shots released by PR. 😕